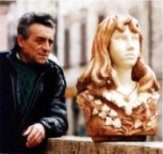 Aurelio Passeri was born in Gubbio on the 18th July 1930. He became orphan of his father at the age of 12 years and this caused him to have a difficult childhood.
From a young age he already showed great interest for art in its various forms.
He had always been at attentive observer of nature and of man.
He was a painter of constructions, thanks to which he could take care of the needs of his family: wife (Lina) and two children (Luigi and Mirella). Luigi follows the art of his father, already with clear results, especially in marble sculptures.

Aurelio dedicated every moment of his free time to classical sculpture in wood and marble.
He made about 45 works of art, some of which were of natural size.
He has had exhibitions in various occasions in Rome (at the Forum Interart gallery, via Madonna dei Monti), in Gubbio, Arezzo and Riccione.

He was invited to expose his works at the:

He received many prizes:
He received the european Rome Art plate 1997, in Campidoglio, directly from the hands of the major of Rome (Francesco Rutelli).

Apart from articles and reviews in newspapers, "La Nazione", "Il Corriere dell'Umbria", "Il Corriere Adriatico", Passeri's work was also presented on Italian television in national and regional programs.
His works can be found in public and private collections.
Aurelio Passeri is included in the List of Contemporary Modern Artists of 2001.
In the famous book "Image", the journalist Nicolina Bianchi writes: "as time passes the name of this interesting sculptor is affirmed in the world of elite collectionism.. His works of art are pushed by a deep interior necessity…".
With enthusiasm he talks about his passion of ceraiolo in general and Santubaldarian in particular. He remembers with pleasure to have made the statues of the saints of the Small Ceri three years ago.
He states with pleasure to be an honorary member of the Workers Society of Mutual Help (Societŕ Operaia di Mutuo Soccorso di Gubbio) of Gubbio.