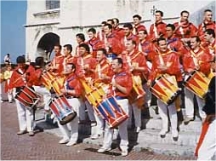 The Group of drummers of the Ceri was formed spontaneously in the fifties, encouraged by the Association Maggio Eugubino.
This organization is of the 1980's, the year in which it was legally constituted.
There is a characteristic fact which distinguishes the Association, that is that there are no rules stipulated, but only "traditions" to be respected.


The Association is represented by:
President: Luigi Filippini.

The participation to the Festa of the Ceri, esclusively and only on the 15th May. (The Ceri mezzani and piccoli have their own drummers and are not part of this association).

The arrangement of a "Taverna dei Tamburini" in a characteristic place situated in via F. Cavallotti ("scalette dei zoppi").


Initiatives on programme:
Sister city with the "Drummers" of the Palio di Siena.

Considering the possibility of accumulating funds for the restoration of an architectonical corner of Gubbio.