Since the early times Gubbio has been the centre of the production of famous and known ceramics. The remains of antique furnaces for the production of building material and vases were found in the vicinity of the Mausoleum and the Vittorina.

Probably the quality of the clay was excellent: the best resources of clay were localized in the lower part of the eugubinian plains (along the river Saonda).
The first documentation written on this antique art of ceramics can be found in the XIII century and from these we can understand that the eugubinian vase producers produced products of good quality and sold not only in Gubbio but also in other cities of Umbria and Marche. The type of these objects can be connected to the typical Umbrian production: the vases (jars, bowls, plates, pots, and cauldrons) were finished off in glass and often decorated ( the colourants were most of all manganese and copper which gave the green and brown colour to the objects). 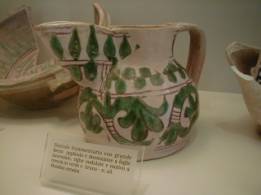 With the passing of time and with improved contacts with other centres of ceramic production and civilty, there was a refinement in the production techniques. Enamels with a white base composed of tin and lead, and the number of colouring oxides increased: thanks to the Arabs cobalt became known and they obtained beautiful blues, antimony for the yellows and chrome for the greens. The increasing technical capacity of the ceramists and the possibility to have a wider range of colours called, from 1400 onwards, many artists who contributed to increase the consideration of the ceramical products.

Just at the end of 1400, maybe attracted by the good name, the Andreoli brothers came to Gubbio from Lombardy, the more famous, Mastro Giorgio (1470 - 1555), contributed to bringing the name of the city of Gubbio in the signing of worldwide ceramics.

The Andreoli already had a discreet experience in the field of ceramics because it is known that they had a society with the eugubinian Mastro Giacomo di Paoluccio with whom they collaborated in the first years of their stay in Gubbio.


After the first ten years of the 1500 Mastro Giorgio guided the growth of the family shop, because he developed even more the particular and precious "shining" technique which thanks to a third baking and a sophisticated technique, created special effects and metallic effects, mostly with gold, ruby (red) and cantharis (green). 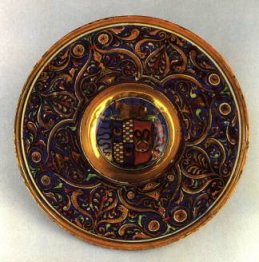 
From the XIII century the shining ceramics were introduced in Italy from Majorca (from which comes the name "maiolica") and were produced by potters of the "mori" race (spanish of arab blood). 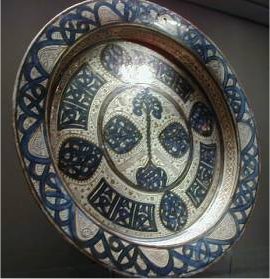 
In fact, the shine in the ceramics was attributed to the arabs (in the IX century), but it was Mastro Giorgio who developed it more and made it precious and demanded by the richer and noble classes.


To increase even more the level of his ceramics, Mastro Giorgio called other famous painters from other cities to his shop and often "shined" ceramics sent to him from other ceramical centres.
The period of major production and of highest quality if from 1515 to 1535 as we can see from the dates under the plates which are in the most important public and private collections all over the world.


After this period Mastro Giorgio gave over his shop to his two sons Vincenzo (mastro Cencio) and Ubaldo, but he assisted to the decrease of quality and production. The Andreoli were rich and famous and in high society now, and it was understandable that they didn't have the tenacity that they had at the beginning of their activity. 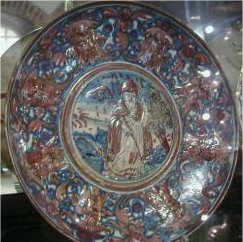 
We like remembering a poem written by Gabriele D'Annunzio (1863-1938) for Gubbio in which he refers to the majolics of Mastro Giorgio:

In the sixhundreds and sevenhundreds, due to the increasing request for porcelain from the dominant classes, the majolics assume more humble characters because who bought it didn't have much to spend.

In those periods in Gubbio, as in most of the big centres of ceramical production, ceramics were produced for daily use, with decorations from potters who weren't any of the artists of the Renaissance. 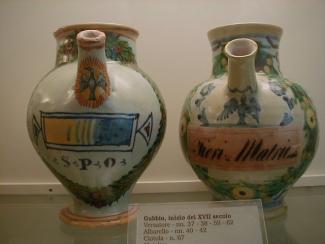 
But it was towards the 1850 that we assisted to a new interest in ceramics thanks to the phenomenon of "Storicism" which revalued the great masters and the arts of the classical period.

Seing that in Gubbio the majolics of Mastro Giorgio (especially from English, French and German tourists) were very much requested, thanks to studies and hard tentatives to revive the shine effects of Mastro Giorgio, made by Angelico Fabbri and Luigi Carocci, there was a return to the production of high quality in the ceramic field. 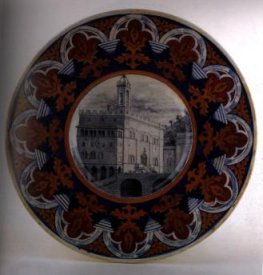 
After these, other names of famous majolic artists of the X1X century were: Giovanni and Rodolfo Spinaci, Raffaele Antonioli, Pio Pieri, Antonio Passalboni, Giuseppe Magni.

In the ninehundreds other new artistical impulses pushed the eugubinian ceramics higher up and we remember the societies of Eugubinian potters (directed by Ilario Ciaurro) and the majolic Factory Mastro Giorgio of Polidoro Benvenuti (in which the technique of black ceramics "the bucchero", still produced today, was experimented). 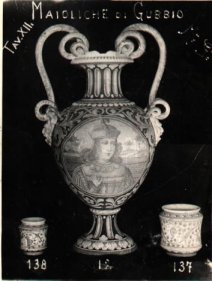 
In this period the first experiences of another great master, Aldo Ajň, started, whose very original style was very much appreciated and whose works entered in private collections and also in public collections as the International Museum of Ceramics of Faenza and the Artistic Industrial Museum of Naples.

Cover of the catalogue on the show organized by the Banca Pop. of Faenza entitled:
Aldo Ajň: majolics from the years Thirty to Seventy.


Presently the eugubinian ceramical factories are about twenty and the largest number of them are craftsmen.

The kinds and styles are various and changeable to satisfy the Italian and international market, but it is always sensible to the "minor art", as they call it, but still encloses some of its cultural and material patrimony of the civilization which expressed it. 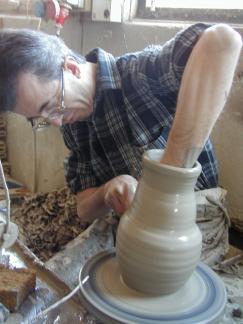 Phase of the shaping on the lathe 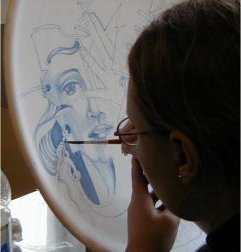 Decoration before the second baking 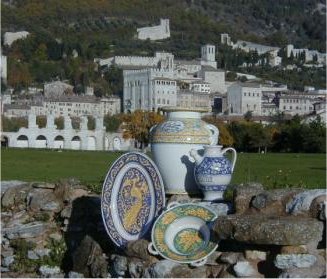